The wonderful, the not-so-wonderful, and the mistake

Yesterday was a great day thanks to Lily's Quilts Small Blog Meetup.  Not only did I find lots of lovely new blogs to follow but I now have readers!!!  Yay!  And comments!!!  Again YAY!   However, I didn't know (and don't know) the differences between becoming a follower and adding a blog to my Google Reader.  I added several blogs from yesterday to my Reader but on my profile, it says that I'm not following any blogs.  I need to check into that.

I don't usually buy charm packs (I plan to write a post about my fabric buying soon).  I can actually say I have bought charm packs 3 times.  The first time was Nicey Jane (love!) which I used to make a doll quilt for my middle daughter.  The second was a few months ago to make a baby quilt for the baby.  The charm pack I used for the baby quilt included strong reds, blues, greys, and whites.  I didn't prewash the fabric (I usually prewash yardage) and when I washed the quilt, the colors bled.  I still love the quilt and use it daily in the baby stroller but  . . .

Last week, I again ordered charm packs from two different online shops.  Both orders came on the same day and for some reason, I decided to divide the packs by color and prewash.  I knew this would involve lots of ironing since I probably had almost 200 charms but I decided to do it anyway (I don't know - maybe the sleep deprivation from having a baby is getting to me?)  I started with the blues, purples, and similar and put the charms and yardage in the washing machine.  I should have known there would be some unraveling but it was more than I expected so when I put in the reds and pinks, I put the charms in a mesh lingerie bag.  I also put the wet charms in a lingerie bag for the dryer.  And, here is what I ended up with. 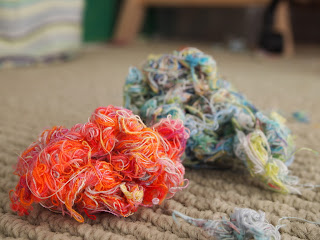 Lots of unraveled ends, clumps of loose threads, and several hours of ironing and sorting.

When I opened the packages, Middle Daughter asked if I could use one of packs to make something for her (I've been making lots of baby quilts lately.)   Since I had only planned on making baby, doll, and mini quilts, I only bought one set of each design but I had about 1 1/2 yards of off-white fabric so since the Little Apples came out basically unscathed from the above experience, I chose that and this is what I made.  (I used this tutorial to make the top "blocks.") 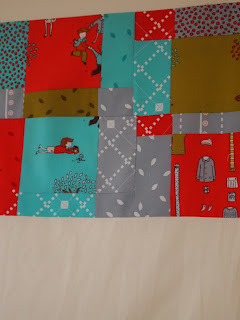 But don't look too close - it was just one issue after another, I messed up the seams - sewing one side up and one down. 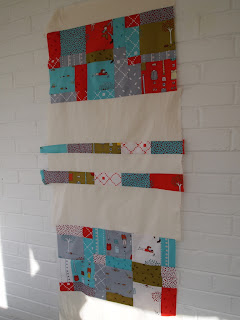 AND the two strips were not supposed to be wonky.

AND the overall size was just off and since I didn't have any fabrics in my stash that I thought coordinated well, I cut it into a "doll" quilt and pillow, maybe? 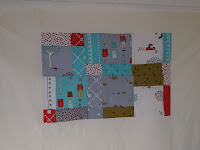 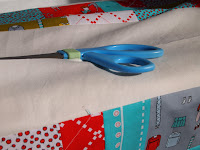 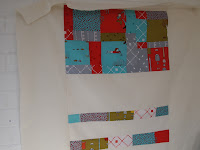 I probably should have just stopped and put it away for another day but No - I chose a backing that doesn't exactly coordinate but I know Middle Daughter would choose it and then I don't know why but decided to quilt on a diagonal. 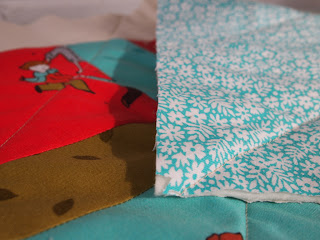 I thought with the small size, I could just get straight enough lines without marking - WRONG! 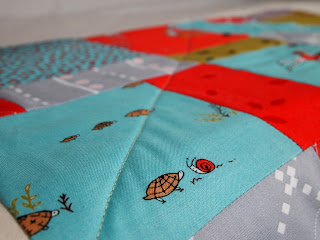 I cut the binding but we'll see what disasters that brings tomorrow.  BUT despite all this, I know Middle Daughter will absolutely LOVE it!  And in the end, that's all that matters, right? 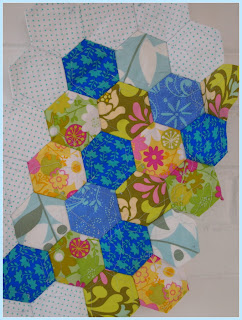 Yes, I love hand-quilting but wow, these are taking a long time.

And, now that I possibly have readers (if you made it to the end of this post) - do you prewash your precuts?  I've also read about washing the final project with vinegar - does that work?  My hubby is worried it will ruin the washing machine.