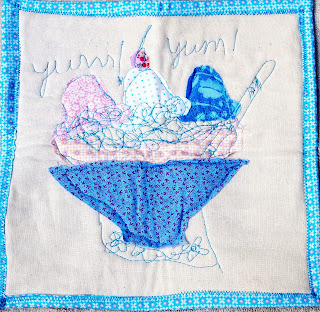 As I recently wrote, I got a new sewing machine in December and passed down my old one to my daughters.  As excited as they were to have their "own" machine, the cool features I have been discovering on my new machine have definitely piqued their interest.  My 9 year old is especially taken by free motion quilting and has sat so patiently by my side watching me practice this new skill these past few weeks that I decided to let her have a go at it.  And 4 mini quilts later, she is even more hooked than I am!  Thus inspiring my first post about crafting with kids.

I got her started by making a quilt sandwich using cotton batting in the middle and ironing it together (which must have made it hold together well enough because she didn't have any puckering issues.)  I didn't want to use any quilting pins to avoid her having to worry about accidentally sewing over one but if you need the sandwich held together better, maybe long basting stitches might work?  I also set the stitching speed to medium for her and explained that she should push the pedal down all the way but that she would have to experiment to figure out the speed that she needed to move the fabric around to avoid too short or too long stitches.  And reminded her to reinforce the stitches at the beginning and end.  I then basically left her on her own to design and stitch.

I don't know - maybe because she is 9 and doesn't obsessively read quilting blogs and books, she didn't go into this thinking it would be any harder than regular stitching so because of mind over matter, it wasn't??? 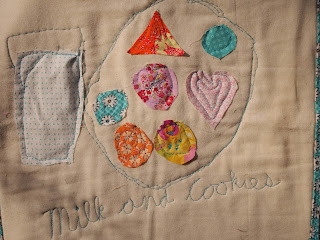 I don't know enough about free motion quilting to know if there is a better answer to this but we also realized that if you make a mistake, it is better to redesign to fix the mistake rather than remove the stitches.  Maybe it is because the stitches are in the middle of the quilt or maybe it was the fabric we used (which also is impossible to iron) but I found that ripping out the stitches just left obvious needle holes. 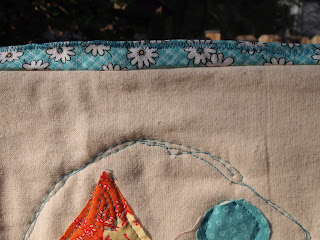 I'm still not comfortable letting a 9 year old use an iron so I made the binding for her but she wanted to sew it on herself.  I showed her how to make mitered corners and told her where to stop sewing to leave enough of an opening so that I could put the ends together.  I then folded the binding over to the back of the quilt and ironed it for her.  It was good that I did this because I noticed that she missed in a few places either because she got too close to the edge or because the raw edges weren't lined up correctly especially near the corners.  This was easily fixed at this point and we made a note to always check before moving on. 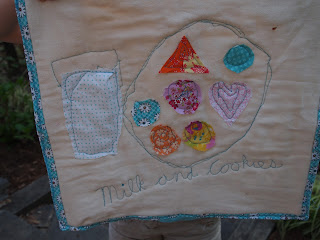 This was how we did it.  I'm curious as to your suggestions for machine sewing with kids.